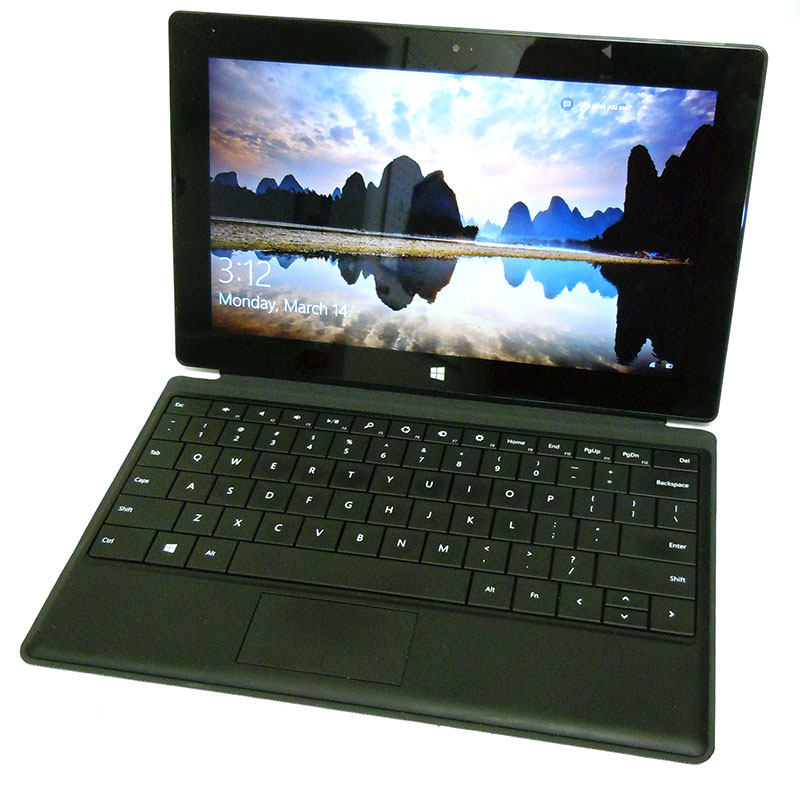 I have put off purchasing one of these for a while as I just did not see the use. For me it just does not fit in with what I want to do. That said, it is a very nice product which I can certainly see why people who do have a need, love them so much. 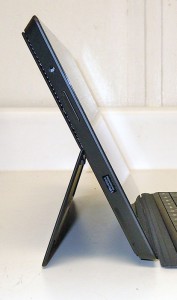 Left side of the unit on its stand

Not only can you run any Windows software on this, you can do it quite quickly. With a 3rd generation i5 CPU, 4GB of RAM and a 128GB SSD it is faster than the majority of desktop computers I run across these days. Running software is just as quick with no hesitation at all. Amazing how when Microsoft is in control of both the hardware and software the unit runs very well. This has been a huge advantage for Apple since…well…forever really. It is nice to see Microsoft finally use this to their advantage.

One complaint I have, and it is the same for almost all tablets these days, is the glossy screen. In a room with no windows it is beautiful. Put some light behind me or God forbid go outside and I can’t see diddly. Not to mention fingerprints, ick! Fortunately there are several manufacturers of non glare screen protectors out there. I have to do the same thing to my iPads, iPhones, and my Android tablets/phones as well so take it for what it is worth. 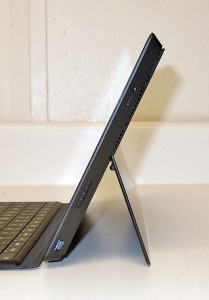 Right side of the unit on its stand

My biggest problem with this product as I stated a little earlier is that I don’t really have a use for it. I use a desktop for serious work such as video editing, photo editing and of course, FPS gaming. I use a i7 laptop for my astrophotography and computer work (programming, web design, some photo editing when on site, etc). I use a tablet (iPad mostly, some Samsung Android as well) for general data consumption, email, web, light gaming, controlling my air conditioner at home, etc.

The Surface Pro is an excellent melding of tablet and laptop for someone who needs the extreme portability of a tablet with the functionality of a laptop. Need a full copy of Outlook and Quickbooks in a tablet form? Gotcha covered.

Top of the unit on its stand

Another issue I have  with the positioning of this product as a combination of tablet and laptop is that for something designed to be so portable, where is the cellular modem? To my knowledge, there is no option for a cellular modem at all. In fact, when I inquired about it, a Microsoft rep at my closest Microsoft store told me to buy a hotspot from my cell phone carrier. What? Really? I can buy tons of Apple and Android devices with modems built in but not Microsoft? Bad move guys.

Now in all fairness, this device would be a lot less likely to be used off wifi than something like an iPad. You tend to use this for more localized work where internet is either not really necessary or where you have abundant access to wifi. But still.

The construction of the unit is absolutely first rate. It stands well with the Apple and top Android products. It is heavy but it carries the weight well. The metal they use is smooth without being excessively slick. I honestly would not want to use this as a e-reader or consumption device for any period of time but that is not its forte. Carrying it around in my bag is not overly burdensome especially considering the power.

The keyboard that comes with it is amazing for its size. It has far more travel than I expected and a very good amount of resistance. Is it better than the one on my laptop? No. But it is remarkably close.

Overall I would highly recommend this to someone who needs as much portability as possible while maintaining the power and flexibility of a full blown computer.

I hope you enjoyed this review of the Microsoft Surface Pro!