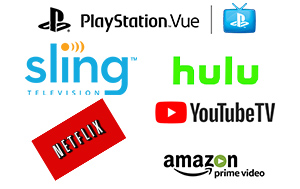 A lot of people are still using a traditional cable service simply because they have been using it for so long that they don’t think about any other way to watch TV. For a lot of these people, they don’t know they can have a better experience for less money.

I won’t be using the term “cord cutter” much here because in all fairness anyone who watches TV does so through a cord. That cord could be their internet connection, an antenna cable, or a traditional cable TV connection, it is still a cord. We could sit here and discuss what exactly cord cutting is for hours and get nowhere.

When I decided to take a close look at my cable bill I realized that I was paying almost $200 a month for internet, cable and a home phone.

The first realization was that I almost never used the home phone and didn’t need it. With all major cellphones now offering wifi calling there is simply no good reason to have a home phone and cell phone. That cut $10 off the bill immediately.

The next thing to work on was TV. I did not want to do without my live TV as I sometimes enjoy watching the current news and some programs as they air. You can of course use a web browser or app to stream live news from a lot of sources but I really wanted one app or one interface for all my live TV watching. Fortunately there are live TV services over the internet that fit the bill.

The two services that had the best channel lineups for me were HULU Live and Playstation Vue. They were within $5 a month of each other and both offered reasonable channel packages and cloud DVRs. The biggest difference was the guide.

Since I was coming directly from cable using a TIVO box I really wanted something that looked and acted like my existing setup. This was where Playstation Vue (PSV from here on out) took the lead. The HULU Live guide was just plain horrible while the PSV had a guide interface which was very much like the TIVO interface I was already used to.

YouTube TV is also something to look into however the channel lineup was not really what I was looking for as it was missing what I consider required channels like CNN. It also was not as slick as PSV although I would expect this to change soon.

The down side to PSV was that I could not watch much in the way of previous seasons. This necessitated adding something to the equation, namely HULU. Don’t confuse HULU with HULU Live. They do run in the same app on most platforms but that is it. HULU has the largest selection of previously aired TV shows of any service. This comes in two versions, with limited commercials and with no commercials.

The limited commercials version has slightly fewer commercials than the same show would have had on TV but only slightly. They also do not have as wide an array of advertisers which means you see the same commercials over and over again. While you can pause these commercials you cannot fast forward through them or skip them like you can on a typical DVR such as a TIVO. This service runs about $8 a month for unlimited streaming.

I will be keeping an eye on HULU Live as they make changes because with a couple of tweaks (primarily to the guide) I could see using HULU Live as my only online streaming service (HULU Live comes with the standard limited commercial version of HULU as well).

One thing to watch is that most internet service providers today have data caps and after these caps are reached they tend to charge you a pretty hefty fee for going over them. With my ISP I was forced to upgrade my internet package to get the unlimited package so that I did not have to worry about streaming my way into high usage fees.

To be honest, most of the reason this was a problem was that when we started streaming it was such a fun novelty that we streamed way more TV than we normally would have watched, probably ten times more. It was around Christmas time so we immediately started binge watching entire series at a time, me in the living room and my wife in the bedroom. Once things calm down and the new wears off we may not need the unlimited plan.

Our streaming services cost about $50 a month for both services and we had to increase our internet by an additional $20 a month bringing our total “TV+Internet” bill to $120 a month. This was a savings of around $80 a month and gave us 95% of what we had with the cable company and much faster internet for other uses.

If you are not that interested in live TV such as news services you might can get by without the $40 a month PSV subscription. If however you are into sports, you might even have to pay more as my plans include no sports.

Of course you can augment your online services with an antenna to gain some local sports coverage and channels like PBS which is not common on streaming services.

One thing I do not see mentioned much is how well the streaming service works as compared to a cable connection. For some reason, people just don’t talk about it much. This was an important consideration to me, I wanted something that not only gave me the content I wanted, but delivered it in same way.

While watching both PSV and HULU I have had buffering at times but these instances are few and far between. Even when it does happen, it is so brief of a buffer that it does not detract from the enjoyment of the program. I would estimate that at least 98% of the time I see no indication at all that I am watching a stream and not a cable broadcast.

Another huge advantage is that we can watch both services not only on our TVs, but on our phones and tablets as well. Most services allow us to watch most programs wherever we are just as if we were at home watching TV. I haven’t tried this traveling yet but will be testing this out around the US later this year. So far, we really like this feature.

There is one down side, audio. It seems that none of the services I have tested has true surround sound. This isn’t to say that the sound is bad, just that the TIVO with my cable connection gave me better audio for some TV shows.

This setup so far has proven to not only save me money but to be quite reliable. It has also been easy enough to do that the switch was painless for both myself and my wife, all over the house. Without a doubt, one of the best moves we have made.