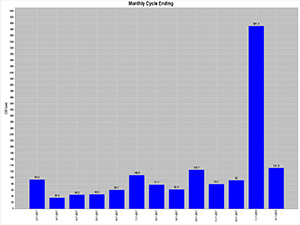 There are a lot of data calculators out there to help you figure out how much data you will use streaming video, unfortunately for me they were all wrong.

So how much data can you expect to use and how fast does your internet need to be in order to stream? Those are some tricky questions, but let’s see if we can get some answers.

What can make it vary when all those things are the same? Which advertisement the service shows, if there are any updates to the app you are using, the available bandwidth you have, any other devices on your network that may be using internet bandwidth at the same time, and the list goes on and on.

So things are really variable, that doesn’t mean we can’t get a good idea of what we will need, it just means that what I need and what you need may tend to look a lot different. That’s OK, all we really need is a good place to start and we can figure things out from there. 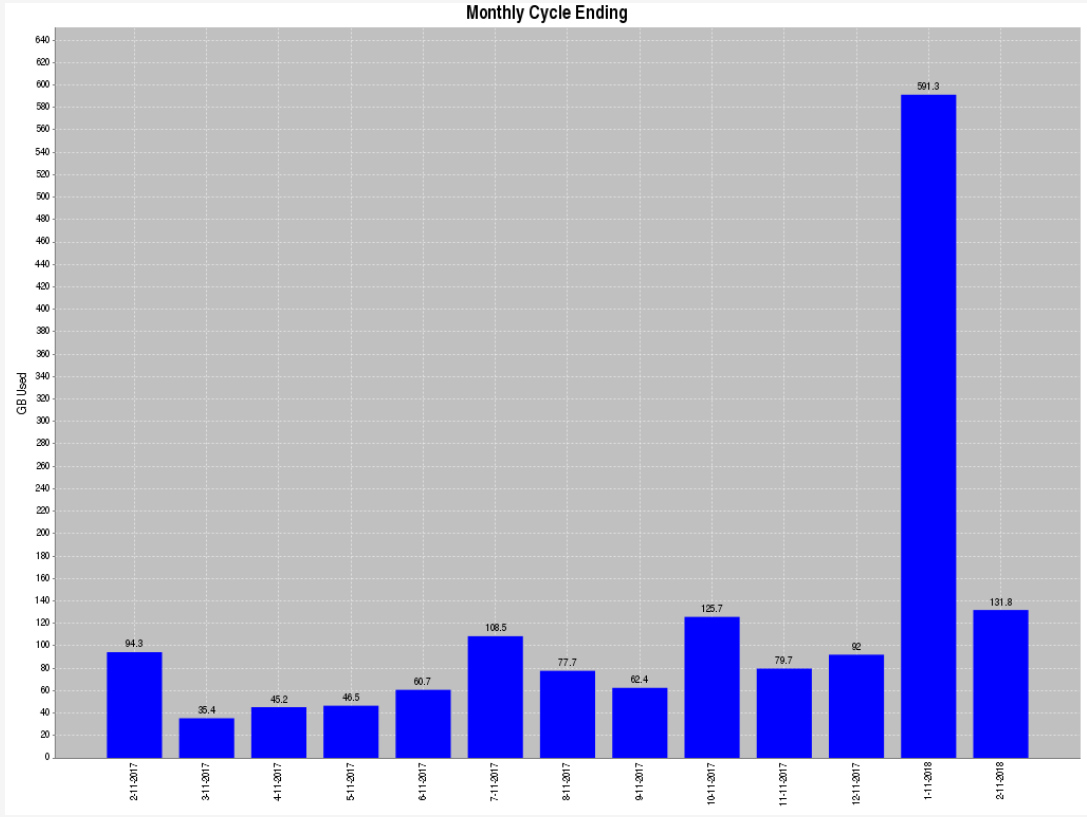 To start with, here is a graph of my internet use before and after I started streaming. All through the year including November I was watching typical cable and doing no real streaming. Starting in December however we switched to streaming about half way through the month. Look at the data usage spike.

Keep in mind that the use spikes really hard as it would with any new toy, we went a little overboard. It calms down a little and will eventually calm down even more over time. The main thing you need to take away from this graph is that this is only two people streaming on two devices. compare that to what the online data use calculators show and you will see that what they calculate and what is shown here is vastly different.

The primary point here is that data use is massively higher than what the calculators say should be the max. In fact, if you multiply the online calculators by five, it is still far less than what we actually used.

So the next question is usually if we think our internet service provider is saying we used more than we actually did. This is usually followed by a suggestion that this may be the way they make you upgrade so they recoup some of the costs from not having you as a cable customer anymore (assuming your internet service provider has TV services too).

My reply is that it doesn’t matter. There is nothing you can do to dispute the amount of data they say you use without going over the top with diagnostics. And even if you had what you think is proof, they don’t have to use your proof. So short of you filing a lawsuit against them which will cost you a small fortune in time and money, there is again, nothing you can do but use their numbers.

So what this means is that you can expect to use somewhere around 250GB a month for serious streaming per person or device in your home assuming you have real high speed internet and HD televisions. This will tend to reduce after the first month or so but can spike back up any time you have a lot of free time and decide to do a little binge watching. It can also jump way up if you are streaming 4k content.

While I normally don’t tend to binge too much I find that on really crummy weather days, and at times when I am at home sick with the flu or something similar, I tend to do a little more damage than at other times.

Now that we have looked at the total amount of data you will use, let us look at what speed you will need.

Today’s streaming services are really well behaved on slow internet connections. They can buffer in the background, lower the video quality and lower the audio quality to fit within your limitations. Indeed you can watch services such as HULU and Netflix on your phone with even a low end 4G LTE connection.

If you are talking about your home, the most important thing is not really the speed, but the consistency of your connection. A good solid 1.5Mb connection that never slows down can stream a Netflix movie without a problem. A 20Mb connection that is a little flaky on the other hand may cause a lot of annoying buffering.

One of the most important things people tend to forget is how many things they have on their internet connection at their house. In today’s world it is not uncommon to have things on your internet connection using bandwidth such as your cellphone, laptop and desktop PCs, thermostats, Blu-Ray player, Amazon Echo, Hue light bulbs, alarm systems, security cameras and much more. Any of these items could start using the internet at any time, and this can cause pauses or buffering in your connection.

Add to that the fact that many people tend to connect their streaming device, as well as everything else, using wireless. This of course is right next door to their neighbor doing the same thing, and the neighbor on the other side, and the one across the street. Now add in interference from the microwave, cordless phones, cell phones, air conditioning units, and all kinds of other electronic interference and you have a recipe for terrible streaming.

The first thing you can do to improve your streaming experience is to make as many network connections in your home wired as possible. This is particularly helpful if you can wire your streaming device instead of connecting it using wireless.

Next is you can make a better wireless connection either by moving your streaming device closer to your wireless access point (or router).

Lastly you can get a much faster internet connection than you might actually need. What this does is it can fill the buffer in your streaming app much faster. With this, you might not ever see it buffer as it can all happen in the background.

To recap, the main concern you need to have is the amount of data you will use in a month. While internet speed certainly is a consideration, if you have a high quality connection at even a slow speed, you should not have a problem streaming most services.