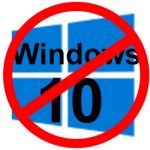 Windows 10 is getting close to being a year old, and Microsoft is really pushing hard to get it on to every Windows PC it can. Since the upgrade is free for most Windows 7 and 8 users on their personal computers (the free upgrade does not apply to larger businesses, government or educational users) people are always asking me if there are any reasons they would not want to upgrade.

There are always reasons not to upgrade. Reasons may include something as simple as you don’t like the new start menu, or as serious as there are no drivers for your hardware. Let’s explore a few of these a little more in depth.

The biggest reason is that your computer may not run Windows 10 at all. It is possible that drivers are not made for the hardware in your computer. This is primarily an issue for laptops and not desktops. If you are getting the pop ups asking you to upgrade to Windows 10 then Microsoft believes that there are drivers for enough of your hardware to run the upgrade. Be warned however, this does not mean your printer, scanner, or other non-required devices will operate, or that they will be fully functional. One example is my home HP Color Laserjet 2320 which will print file under Windows 10 but the scanner will no longer function.

Computers with Windows XP or Vista do not qualify for the free upgrade, which is true for anyone running volume licenses such as large businesses or schools. This doesn’t mean you can not run it, or that it will not run, but it does mean that you will have to pay for the priviledge to find out. I would caution you that a machine that old even if it runs WIndows 10 will not do it very well. It is often possible to find a refurbished or even used PC from places like Newegg.com that come with Windows 7 for just a little more than the cost of purchasing just Windows 10. These machines will qualify for a free upgrade to Windows 10 and give you a newer and faster computer instead of trying to shoehorn a brand new operating system on your old PC.

As mentioned above certain external devices, and some internal, may not be fully functional under Windows 10. Before you upgrade you might want to check and see if your multi-function device will still print, scan and fax. Strangely enough make sure it not only prints, but prints in color. I have had printers that work in newer operating systems using generic drivers that will not work in color. Also check features such as being able to print multiple copies.

Mice and keyboards are usually safe unless you have ones with unique features. Virtually all corded and cordless mice and keyboards will survive the upgrade but may only function as standard mice and keyboards. What this means is that if you have a keyboard with special keys such as volume controls, shortcut keys, a calculator button, etc you may lose those abilities unless the software exists and works for Windows 10. Mice are the same, that nice gaming mouse with on the fly dpi adjustment and extra programmable buttons may now work like a cheap ten dollar mouse from Wal-Mart.

Other things to check can include plotters, trackpads, digitizer tablets, stand alone scanners, game controllers, higher end sound cards, touch screen monitors and other such devices. This is not meant to be an exhaustive list, just a starting point. Anything out of the ordinary of what you can buy pre-installed inside a machine from Best Buy is something to look at. 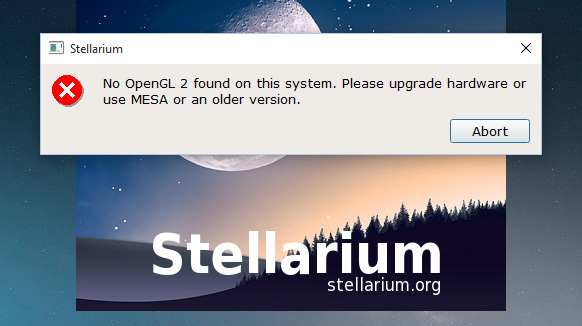 Next up is software issues. Certain software may not function correctly or at all in Windows 10. Some things to look out for are older versions of software which were released prior to Windows 10, or about 2015. The vast majority of software from 2014 will run without issue but before that is anyone’s guess. Games and any software that directly accesses the hardware are particularly likely to have problems. Graphics libraries are particularly troublesome, for example OpenGL 2 is not included so programmers need to update their software.

A great example of software issues I have had are with customers with older versions of Quicken and Quickbooks. The upgrade goes fine but since these can require older versions of Internet Explorer (Quickbooks used IE for a lot of displays and is (or was) very tightly integrated) that get replaced with Windows 10.

For a lot of applications you can probably just get an update or find alternatives. There are some cases where that is cost prohibitive. One cable TV company I worked with still maintains a few Windows 98 computers because the upgrade to the software that manages their channels is over fifty thousand dollars. Being a rural provider outside a small town means that is a huge amount of money for them.

Things I have had issues with include the accounting software already mentioned, software used to control embroidery and sewing machines, several very popular games, antivirus/security software and programming software. If you need it and it costs more than a few dollars to upgrade, check it.

So where do you check all your hardware and software to make sure it is compatible. I recommend you check with the manufacturer. Look on their website and if that does not answer your question, call them. It is better to be safe than sorry so spend the time to make sure.

There are also currently things in Windows 10 that are simply broken. My biggest frustration right now is that the search feature, where you press the Windows key and start typing what you are looking for, is broken. If you download, or copy, an executable file to your computer it does not show up in your search. Even if you pin this application to the start menu, or task bar, it is invisible to the search engine (actually, the search engine sees it just fine, it just omits it from the results it displays for some bizarre reason). This is pretty important to me as I tend to have a lot of these and prefer using the keyboard for speed. In Windows 7 I can accomplish certain tasks substantially faster than in Windows 10 and that is indeed annoying.

Another problem I have with Windows 10 is the automatic installation of updates. I have no problem with the theory that the operating system should always be up to date as this makes sure it is protected as well as possible from the latest threats. The problem is with the execution.

Lets say that I am sitting at my workbench working with my laptop. A call comes in where a customer’s phone system has lost its programming and they can’t figure out how to do anything. They are losing calls and customers and need it fixed immediately. Time is literally money. I hang up the phone and click shut down on my laptop, it says “Now installing update 1 of 38”.

At this point what I want to do is throw the machine out the door while screaming profanities, but I don’t have the time. What I wind up doing is putting it in the front passenger seat of my car, seatbelting it in, and driving away with it installing updates. Really? How hard would it be to simply put a question at the shutdown prompt saying it has updates, and asking if now would be a good time to install them? You could even limit this to only laptops if you wanted. Or you could make it a feature that you had to turn on manually. This is just pitiful. 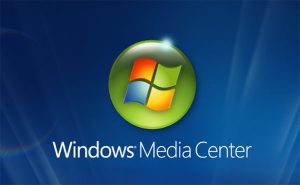 If you happen to be one of the ten people in the world who uses Windows Media Center (not to be confused with Windows Media Player) then you need to either stay away from Windows 10 or find an alternative media center software package. Microsoft has decided not only to remove Media Center from WIndows 10 but if you have it installed on your machine it will uninstall it before running the Windows 10 upgrade. This is a problem because even if you uninstall the new Windows, it will not put Media Center back so you wind up with the version of WIndows you started with, but nothing to use as a media center device. Bummer.

The last big reason (other than you just don’t like it) not to upgrade to Windows 10 is training costs. Whenever you change something on a computer to make it operate differently, it takes time and effort for the user to adjust the way they work to the new system. For a single tech savvy person this may be just a few minutes, for a company filled with non-computer literate people this could be months. These costs are not just what you may pay to educate the users, buy them books, or to have new proceedure manuals written, but the lack of productivity you encounter while they learn.

This can wind up being a huge expense and is why many large corporations skip one or more upgrade cycles. It can even be a problem with smaller companies as they often work on such slim profit margins already that reducing productivity even for a short period of time is simply not acceptable.

If you wait longer than thirty days then you are in trouble. The only way back at this point is to reinstall the version of Windows you had previously which will erase all your programs and data. You need to be really sure at this point that you can’t continue using Windows 10 as this is a really big deal. 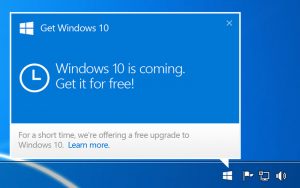 One of many Windows 10 nag screens

What if I can’t upgrade to Windows 10 for whatever reason, can I make it stop bugging me? There absolutely is! GWX Control Panel is a piece of software by Ultimate Outsider at http://ultimateoutsider.com/downloads/. This software will allow you to disable all the nags, popups, and system tray icons (except the one in new Internet Explorer tabs) and actually not allow Windows 10 to install. The author keeps it pretty up to date so if you do as well, you should be able to avoid Windows 10 for the forseeable future. 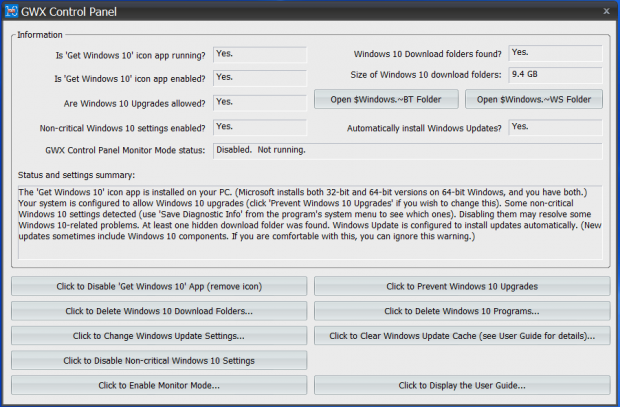 Now that we have covered all of that, should you upgrade? That is up to you. If all of your hardware and software are compatible and there are no bugs/features in Windows 10 that cause you problems and of course you can handle the usability changes, then there is no reason you should not. I believe Windows 10 will be the dominant operating system on WIndows PCs within the next year and most likely will be the direction that all future OSs take. Eventually you may not have much of a choice.

Me? I have a few machines still on Windows 7 for compatibility reasons but the machine I use every day for work is a Windows 10 laptop. It appears to be a fine OS, far superior to Windows 8/8.1. If they fix my main two gripes (updates installing while shutting down a laptop and executables not showing up in searches) I will really like it, even though I do not use the live tiles in the start menu at all.