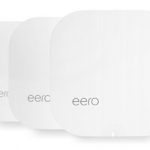 In previous articles we talked about extending and securing your wireless network and that information works fantastic for the vast majority of users out there. Occasionally however someone needs a network extended far beyond what the “normal” wireless hardware can provide. When this happens, it is time for a mesh network approach.

While mesh networking is nothing new, the inexpensive and easy to use models on the market now are. In this article I will be discussing eero products however there are several others including Open-Mesh, Ubiquity, and Luma. I use the eero for residential installs because it is easy to install, reasonably priced for what you get, and tech support is out of Austin Texas with people that not only know their stuff, but that I can understand.

So why a mesh network?

There are lots of reasons you may want a mesh network including one network (SSID), virtually unlimited scalability (need more coverage? Add another AP in less than five minutes), excellent failover (if one gets hit by lightning the others keep working as long as they can see each other) and far superior speed to most extenders and long range 2GHZ APs.

These eero APs talk to each other either on a hidden wireless network which is automatically configured, or you can hard wire each one. If you had a really large house and were building it from scratch then I would highly recommend you connect them using ethernet. This means they do not have to send data on the back wireless network and then out the normal wireless network which can slow things down a little.

What is required to use these?

In order to use these you need a working internet connection. You also need either an iOS or Android device for setup. Let me make that last point clear; you MUST have either an iOS (iPhone/iPad) or Android (phone/tablet) to set these up. You can NOT set these up without that. No, Windows phones do not work. No, you can not use a computer.

I would also say you need to have working cellular data on your device as well. The last install I did with these did not work until I found a phone with working cellular data. I was in a remote location and my Verizon phones kept losing connection. Once I found an ATT phone the setup went well as in that spot ATT had better coverage.

Also when I mention that you must have working internet that means that you can not set these up without it. They connect to their company servers and register themselves to your account. If they can not connect to the internet, they will not allow you to proceed with the setup.

How do you set them up?

The eeros are just too simple. Open the box and pull the first one out. Plug in the ethernet cable to the back (either of the two ports work fine) and plug that cable into your existing router or switch (like you would connect a laptop to your existing network). Next plug in the power adapter and wait for the light on the front of the unit to start flashing blue.

Now open your smartphone or tablet and download the iOS or Android app from the App store or Play Store. I did a search for the “eero app” and it brought it up as the first result on both stores (yes, I have installed these using both an Apple device and an Android device).

Once the app is installed launch it and then enter click on setup new account. The account creation screen will ask for your full name, cell phone number and email address. The cell phone number is important because the app sends you a text message to that number with a six digit code you must put into the app before it will let you install the eeros.

After entering your code the next few screens walk you through plugging in the eero device and getting it ready to find, then it looks for the device. Assuming everything goes well it should find the device and then the following screens will set the device up for you as well as ask you for the name of the network (SSID) and the password you want to use.

Once this device is completely set up the light will be a solid white light and the app will ask you if you want to install another eero. Since the whole point of buying these is to set up more than one, you will of course pull the next one out of the package, plug in the power and proceed through the steps in the app to set it up just like before.

If for whatever reason it has trouble setting it up wherever you want it, connect an ethernet cable between the two devices (without unplugging the ethernet cable already plugged into the first eero device) and try the setup again. Once the second device setup is complete you can unplug the ethernet cable and move the device to where it will be permanently.

You can repeat this process for as many eeros as you have. I personally do not know of a limit to how many of these you can have so I would just add as many as you might think you need. They say that the three pack will cover a typical home and my tests agree with that. On the installs I have done in homes between 1500 and 4000 square feet, three eeros have given me complete coverage of the home with excellent speeds. This of course can vary wildly depending on what is in the walls, what the walls are made of, etc. Then again, you can always just add more eeros!

Once set up they just seem to work. I have been pleasantly surprised at the fact that I have not received one problem report from my installations. Generally customers are extremely satisfied with the results even if they are initially a little put off with the price.

Each eero has two ethernet ports which can be used to either connect them to the internet (in the case of whichever one you designate as the “main” one) or to connect a device that does not have wireless.

Tired of remembering that long wifi password? Eero takes care of that by allowing you to send your friend a text message to join your wireless network. If you don’t want them on your network, you can enable the guest network feature and let them use that.

Another really cool feature is that the eeros are constantly monitoring themselves and can reboot one or more units if it sees a problem. Their website talks about never having to reboot your router again and that really hits home with a lot of users.

A mesh network is the only way to really provide maximum speed with maximum coverage regardless of the size of the home/building. The eero is by far the fastest and easiest to set up mesh solution I have ever seen. Assuming you don’t have anything weird if it takes you thirty minutes to set up  three of these in your home you need to put down the beer and quit reading Facebook while you are trying to install these.

Truth be told however most of us use wireless in our homes to browse the web and read emails so we are perfectly fine with our 802.11n access points running up to 150mb/s (single channel 20mhz mode, typical) instead of the gigabit speeds this 802.11ac hardware can run.

If however you need high speed data transfer such as for HD movie streaming, you might consider this solution. The fast CPUs, generous amount of memory and dual 802.11ac radios in each unit make this a really fast solution.

What about these for business use? I have not had the chance to put these in a large business but for smaller businesses (say 50 or fewer people) these would be an excellent choice.