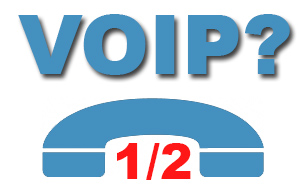 There is a lot of confusion about what exactly VOIP means, what it does, and even who provides it. In this article we will look into some of those things and see if VOIP might provide a solution you can use.

VOIP stands for Voice Over Internet Protocol and at the most basic level means that your conversation with someone else is transported not over the old analog phone lines, but over an internet connection. This simple change make a world of difference as we are about to see.

The first problem we get into when discussing VOIP is that there is typically two places it can be used which can have little to nothing to do with each other.

First is that we can replace the analog phone lines coming into our home or office with VOIP lines. This typically is done when we switch our phone service from a local phone company (in my case such as ATT or Windstream) or a cable provider (such as Suddenlink or Comcast). This change does not change the way we make phone calls, the phones we use, or pretty much anything else.

I have noticed that sometimes this system does tend to give me a dial tone when unused for a long period of time and I first pick up the phone. This can present itself on a line that has not been accessed for a week or more and requires several attempts at hanging the phone back up and trying again.

Another issue you may face is with 911 calls. Every provider is different so you really need to ask your local provider how it handles these calls as soon as you can so you know what to expect.

Lastly, with the old analog lines your standard phone (not a cordless model or one that required an electrical plugin) was powered through the phone line. This meant that even if your electricity went out, you still had a working phone. This is not the case with VOIP systems as the phone, your router and the cable modem will all need to have power supplied in order to operate. This can be provided by a battery backup unit but is almost never included with the purchase of the service.

The reason people switch to this kind of setup is to save money. Very often the phone service is bundled with their internet and possibly their cable TV service. Having all these services on one bill is convenient and often cheaper.

One downside is that cable companies often sell their customer lists and this has often led to massive increases in the amount of sales calls you get. Mine for example got so bad when I switched from ATT to Suddenlink that I have quit using my home phone for anything except outgoing calls. I do not answer the phone, the ringers are all turned off, and the answering machine is full so you can not leave a message.

The only reason I keep the line is because I live in a home with a  metal roof and sometimes cell service is spotty, and of course we have had that same phone number for something like thirty five years.

The next type of VOIP is using network VOIP phones inside your home or business. These can be used with VOIP phone lines, or with standard analog phone lines, or a combination of both. The type of incoming connection has no real bearing on your use of a VOIP phone system.

With VOIP phone systems there are two types of those; self hosted and cloud hosted.

Self hosted VOIP systems means that you have a box at your location that manages the phone system. This is great when you want total control over your system without the monthly costs associated with cloud hosted solutions. It also means that you are responsible for getting it all working and keeping it running.

Cloud hosted solutions mean that you only have the phones, the rest of the equipment is somewhere else and your system access it across the internet. These solutions require a monthly fee but provide technical support, can provide local equipment leasing so you do not actually purchase phones and do not have to worry if one quits working, and often offer more capabilities than a self hosted solution does.

There really is no benefit to a VOIP phone over a traditional home phone for most people. The phones will be more expensive generally and will not provide any features that the typical home user would need.

If you run a business out of your home, or work at home for a company that uses a VOIP phone system, that is a whole different story. VOIP systems can provide voicemail (with messages that can be sent to an email address), and allow you to use the phone as if you were physically in the office with your co-workers.

Let’s explore that last bit a little. How can a VOIP system allow you to act like you are in the cubicle next to your co-workers? Since VOIP phones use the internet and local networks to transport voice and other data, where they are physically located makes no difference. Think of the internet connection and nothing but a really long phone cord.

Whether the phone is ten feet down the hall at your office, or six thousand miles away across an ocean is irrelevant. Pick up the phone, dial your co-worker’s extension, you are talking to them. Press an “all-page” button and you can talk to everyone on the whole system at once. Transfer calls to someone else? Easy enough.

Your traditional business phone system will be easier to install, and normally less expensive than a VOIP system will. It will probably also be more robust unless you spend quite a bit of money on your VOIP system. It will also tend to have fewer problems since it does not rely on switches, routers, modems and of course, the internet.

You can even get a lot of the features such as auto attendant (the recordings that answer the phone and say “press 1 for sales” etc), voicemail, etc on even the most basic of business class phone systems out there.

VOIP systems on the other hand allow you to connect offices and people over any distance into one phone system. Let’s look at this a little more.

Recently I installed a VOIP phone system for a government agency that was spread across the state of Texas. They had fifteen people at one office in Huntsville, ten people at a different office across town, three people in an office north of Dallas, three people in an office in Palestine, and another ten people or so spread throughout Abiline, San Antonio, Austin, and a myriad of small cities all over the state.

With the new system, if someone calls either of the Huntsville offices, the Decatur office, or the Palestine Office, that phone call is routed through the internet to the main phone system at one office here in Huntsville where it is answered by the auto attendant. That auto attendant presents a menu the caller can navigate (or they can immediately just dial a three digit extension number to go directly to any extension anywhere in the state) and wind up where they need to be.

Sounds convoluted, doesn’t it? Well here is why that is so useful.

Before this system, if you needed to talk to John Doe of the State Of Texas Rockcrusher Department, you had to know what town he located in, dial that number and deal with whatever phone system and voicemail system that person had. This could even be someone’s home phone with a cheap answering machine they bought at Dollar General (yeah, the one with the freaky robot voice).

Now any number you dial, from anywhere in the world, will wind up getting the same auto attendant system, with the same voicemail system, and still get you to anyone who works for that agency.

Eventually the plan is to eliminate all the numbers except for one and have anyone who wants to talk to anyone in the agency simply dial one number. This will also greatly reduce their costs and complexity as they will not need as many lines, and certainly will not need to maintain local phone lines for cities all over the state like they currently do.

This also allows for easier training as everyone has the exact same phone that works the exact same way. Have a problem with a phone? Ship them a new one and let them plug it in, done. Need to change the name or password for their voicemail? It can all be managed from a central location on the web. Need to add a new employee at some distant location? Mail them a phone, done.