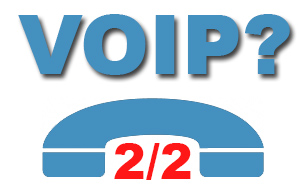 Last time we discussed the basics of VOIP and different types of systems. This time we will get a little more in depth on the subject.

Since VOIP systems use networks and the internet there are things they require that we do not worry with when dealing with standard business phone systems. Let’s talk about those for a minute.

Routers are the devices that allow us to communicate with the internet. Without them, we could have networks, but those networks could not talk to each other and thus, no internet. VOIP systems use a lot of different things in a router to make them work, and even home routers may need some configuration changes to allow VOIP phones to function.

The key to this is starting with a router that is well designed and has VOIP in mind. In the project we have been discussing I did have to reconfigure one person’s home router remotely, but the business offices needed completely new routers installed. I replaced three Mikrotik routers at three locations with TP-Link business class routers and everything worked perfectly.

So what happens if you do not have a good router? The Palestine office had a Mikrotik router and they randomly could not hear each other on inner-office calls, could often not place outside calls at all, and their gateway (the device that sends all their phone lines to the main system in Huntsville) did not work at all. There were other minor issues as well, but these three made the system unusable.

Could we have fixed the issues without replacing the router? I have no doubt. The problem was that it was faster and cheaper to replace the Mikrotik with something I knew worked right out of the box than spend hours trying to open and forward ports, turn off features, etc, with the Mikrotik.

How did it work? Five minutes of configuration to the new router, another five minutes to install it, and instantly all the problems went away. It also gave us new options such as establishing VPN connections into and out of that router (those configurations were certified with our VPN software company and our other routers), and providing redundant internet connections should they choose to do that.

Switches are also important as a cheap switch can cause intermittent voice issues with VOIP systems. You may also want switches that provide POE (Power Over Ethernet) so that you do not have to use power brick that comes with VOIP phones.

In larger installs you may also want to consider using smart switches that provide QoS (Quality of Service) features. This prioritizes the voice traffic over your network so that no matter what happens, your phone calls will  not be affected by other network traffic such as someone downloading a ton of files, streaming video, or people playing games online.

Most VOIP phones these days include a small switch in them. This allows you to take one network cable that is plugged into the wall and use that for the phone. You can then plug another cable into the phone and use that to plug into your computer at your desk. This makes it easier to deploy VOIP phones as you do not have to have two network cables in every office.

I have had clients wonder if you can use different phones on the same system and the answer is yes, you can have different types of phones from the same or different manufacturer all on the same VOIP system. The phones and main controller do not need to be made by the same people either. It is mix and match.

It can also make it nice in large installs as you can download the programming from a phone and should you need to add a new phone or replace a phone you can upload that programming to the new phone and cut your deployment time substantially.

One really interesting feature of some VOIP phones us that they have video conferencing built right in. This means they have a larger color screen and video camera, and that when you establish a connection with another similar style of phone you can not only hear the other person, but see them as well.

You can use this feature in groups as well with some phones, connecting to several people at once with each of their pictures appearing in a smaller square of the screen.

Another interesting use with VOIP is being able to use your cellphone. Sure, you can have your calls forwarded to your cellphone with virtually any system including digital ones, but what you can not do with those systems is turn your cellphone into one of those phones.

What I mean is that you can install software on your cellphone and turn it into just another VOIP phone on the system. I can be in Target picking up some cat treats, whip out my iPhone, open the VOIP app and dial the three digit extension of someone else on the system and be connected to them as if I was sitting at the desk next to them.

You can also list your cellphone as your extension number in a directory listing and in the auto attendant and use it as a complete replacement for your desk phone.

Want to take the software angle a little further? Most VOIP manufacturers also make computer software for Windows and sometimes even Apple computers that allow you to control the phone, keep lists of contacts, and even possibly integrate with programs like Outlook for contact management.

If nothing else, this is really nice because you can see the caller ID up on your computer screen instead of having to look over at the phone. Yeah, I know, lazy.

We mentioned earlier about voicemail to email and newer systems do this right out of the box. There are however two methods; transcription where the system sends you text, and as an audio attachment.

The transcription is nice because you can simply read it, you do not have to hear anything and this is nice when you are somewhere noisy or if you simply want to read it on your watch. The down side to transcription is that it is not perfect and this is particularly annoying when dealing with technical terms or with people who do not enunciate well. It also presents problems with inflection, determining when someone is joking or being sarcastic.

An audio attachment allows you to hear exactly what the person said, how they said it. There is no miscommunication because they meant something as a joke and you took it literally. The down side here is that you actually have to listen to it. Personally, I prefer this method because the content and intent of the message is far more important than any convenience I may get out of being able to read the message on my Apple watch.

These days, anyone who has ever plugged a computer into a network is trying to install VOIP systems, and many times, they work out fine. What you really want however is someone who has substantial experience in analog, digital and VOIP systems.

Start with the very real possibility that you may not be all VOIP, you may need to integrate existing analog phone lines into the system like the example I have been discussing in this article. Network technicians may not understand that you don’t just plug a phone cord into the wall and then into the VOIP controller and call it a day. If they ask “Why not?”, don’t walk away, run.

Just as one example, ask them about surge suppression on the phone lines. On analog lines, when they ring, the phone company sends 90vac down that line. A short between lines, lightning strike, or cross on the telephone pole between a power line and your phone line could not only destroy your VOIP phone controller, but the switch, router, phones, and computers all plugged into your network.

Bet they didn’t think about that, did they? An experienced phone technician will think of that, and a lot more. Don’t let your mechanic fix your broken arm, or your dentist cut your hair, or your general computer repair guy install your VOIP system. Just, no.

The future and VOIP

There is still a strong demand, and use case, for digital phone systems. This is particularly true of systems where you can not rely on the speed or reliability of networks or the internet connection. It is also often more economical to go with a digital system for small businesses.

That being said, VOIP systems are becoming much more common, particularly when coupled with the decentralized office model we see so much of today with people working from home and companies with offices in multiple cities.

VOIP is also becoming much more affordable. As demand increases and more players enter the market the costs of those systems is dramatically decreasing. I suspect any premium you would pay for VOIP systems over digital systems will vanish in the next five to ten years.

I also suspect that installation and management of VOIP systems will become easier in that timespan as QoS is automatically configured to prioritize VOIP traffic over other data types in all but the cheapest networking equipment.

Of course I suspect as networking speeds continue to increase with 10Gbe (10 Gigabit over ethernet), 802.11ax (10 Gigabit per second wireless) and home internet connections that exceed 100Mb/sec that QoS will increasingly become something unnecessary.

It is even possible that in my lifetime it becomes rare to see a digital phone system in use. Time will tell.