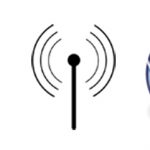 Wireless networks are pretty much ubiquitous these days in that virtually every business and every house has one. My wife and I just went on a trip out to a little town virtually on the border with Mexico and Texas named Terlingua, population 58 as of the last census in 2010. Even the motel there we stayed in had free WiFi.

The problems these days are how far you can get the network to go and how fast you can make it run. In this two part series we will discuss the basics of wireless networks and then build on that knowledge to show you how to extend the range and secure your wireless network.

2.4GHZ is the oldest typical networking frequency and is used for 802.11b, g and n. It is also the most congested and best penetrating. Most congested means that there are a lot of other things on the same frequency such as microwaves, alarm systems and cordless phones which cause interference and slow down the data transfer. Best penetrating means that the 2.4GHZ frequency has an easier time going through walls, appliances and furniture.

The 5 GHZ frequency range can transmit data faster and is used by the 802.11n and ac bands. This is far faster than its 2.4 GHZ brother but has a much harder time penetrating walls and other obstacles. This usually means a shorter range but faster transfer in its usable range.

The first commercially available wireless networking for most of us was the 802.11b standard which runs on 2.4 GHZ and provides up to 11Mb/sec. At the time this was impressive and since most wireless use at the time was just for internet browsing and back then the typical internet speeds were far below 11Mb/sec.

802.11g was the next major step up and it provided up to 54Mbit/sec again in the 2.4 GHZ spectrum. Wireless now could provide file transfers between computers at something approaching reasonable speeds for smaller files.

802.11n was a strange beast in that it supported MIMO (multiple input, multiple output) allowing it to use multiple channels and frequencies at the same time. It was capable of running on both 2.4 GHZ and 5 GHZ simultaneously providing up to 600Mb/sec. It was also plagued by a large number of non standardized products which did not inter operate well together and never in my experience reached anywhere near the 600Mb/sec speed. Even today most 802.11n networks I see run at around 150Mb/sec. This allows for streaming high definition video wirelessly.

802.11ac is the current and latest standards to be widely available and support up to 1300Mb/sec in the 5 GHZ range. Although I have not seen speeds anywhere near this fast it is considerably faster in almost all situations than 802.11n. Finally we have a wireless protocol that can transfer large files with ease. You can also stream multiple high definition videos over the same wireless network with no fear of dropping frames.

New standards such as the 802.11ad WiGig currently being certified allows for running up to 7 Gb/sec over the 60 GHZ frequency range. Currently the only hardware commercially available for this is from TP-Link however more are planned. While 60 GHZ allows for much faster data transfers it will open up a whole new host of difficulties with propagation characteristics and needs for efficient cabling.

The Federal Communications Commission regulates the maximum power output that a given device can have. Typically home devices have a lower power output than a commercial device. The power output can be measured at the antenna connection point or as a factor of actual radiated power output.

Transmit power takes a measurement at the point where an antenna is connected. What antenna or how many antennas are connected makes no difference. The value is absolute.

Effective radiated power is the amount of power tha actually radiated out from the antenna(s). The more efficient the cable, connections and antenna is, the more effective power is output.

The same holds true in reverse as well. The better the antenna, the better the reception. When networking you need both transmit and receive efficiency. Having excellent transmit with horrible receive means radios can hear you when you talk to them but you can not hear their replies, which means nothing gets transmitted.

The next problem is the feed line. You can have an excellent antenna and all the power the FCC allows, but if you have a problem with your feed line you might as well throw it all away. The feed line is the cable that connects your radio to your antenna. For most networking devices this is not something you need to worry about or can even change if you are worried about it as it is located inside your wireless device. Some commercial applications however have a radio that uses coax cable to connect it to the antenna and this is where things get interesting.

When using coax to connect the radio to the antenna it is important to use as short a piece as possible and to use as high quality connection as possible. This can mean mounting the radio on the pole with the antenna (outside grade radios are widely available). In fact many commercial grade access points are meant to attach to the bottom of the antenna while being mounted directly to the outside of a building, on an antenna mast or on a tower.

It is also important to have as few connection points as possible. What this means is that if you are attaching a radio to a feed line, and then that line to the antenna, do not use adapters. Make sure the cable you are using fits both devices directly without the need for adapters. Any adapter, yes even gold plated ones, are like little sponges sucking power right out of your system.

For the typical home user however this is not too much of a consideration. We need a powerful radio with a good built in antenna.

The next decision is what kind of hardware we need. There are two basic types of devices used in most homes and small businesses; wireless routers and access points. 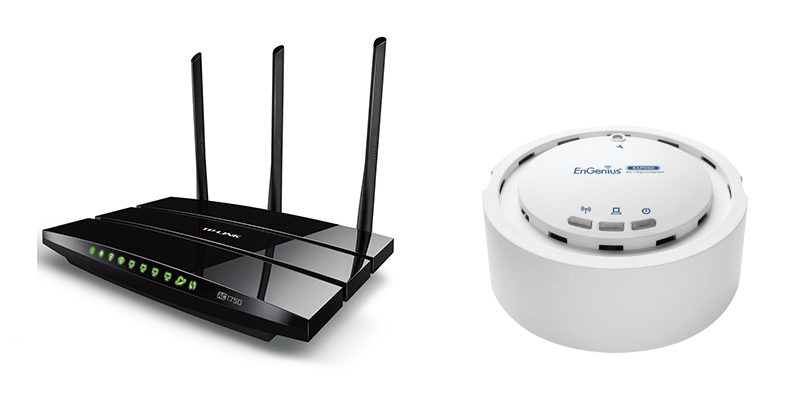 Wireless router on the left, wireless access point on the right

A wireless access point (WAP, I will refer to all wireless transmitters such as access points and wireless routers from here on out as WAPs) takes an existing network connection typically provided by a router and makes it wireless. The easiest way to think of this is that an AP (access point) simply provides a wireless version of a standard networking cable. Yes, there is more to it than that, but that is the base which everything else is built on.

The AP in most home applications contain the radio and antenna as well as a small computer that manages the settings and provides the routing functions required to route all wireless traffic through it’s wired networking connection.

One common misconception is that a network that has both wired and wireless members is somehow divided, it is not. Regardless of the method of connection, wired or wireless, all members on the network share the same network and can exchange data with each other when properly configured.