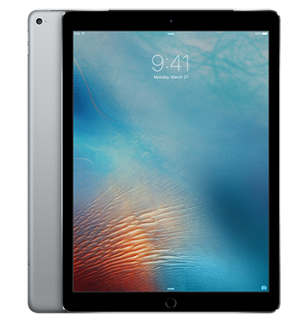 I want to discuss both the original model and the new model of the iPad Pro 12.9″. Since I have both models in my house, it makes sense to compare the two as well as look at the overall model to determine if it is right for you.

My favorite Christmas present last year was my iPad Pro 12.9, even though it was a surprise and not without concerns.

I had an iPad 4th generation 32GB that I was still using and really did not see the need for a new one. Yes, the 4th gen was getting a little slow in a few of the games I played and yes, I was struggling with only 32gb of storage, but it worked and I was comfortable with it. I loved the case I had for it even though it was a little heavy and dirty. It was like an old friend.

Certainly I had thought of getting a new model. I was however concerned about the size increase of the 12.9″ and most likely would have bought myself the iPad pro 9.7″ as a replacement if I was going to buy anything. Honestly it was difficult to think of replacing this iPad until it just wouldn’t do something I needed done. Heck, I still have an iPad 1 in the exercise room being used to play videos when I ride my stationary bike.

I think my wife heard two things a little too often; how slow my iPad was when I wanted to play a quick game, and how cool the big iPad Pro looked.

The size is both awesome, and cumbersome, at the same time. Using the device the extra screen real estate and speed is simply amazing. It is by far the fastest tablet I have ever used. The size of the screen is not just amazing because the older I get, the blinder I get, but also because with this size screen using the device in split screen mode becomes not just a capability, but an incredible feature you can’t do without.

The first thing you have to do is define what split screen mode is because the regular iPads can have a main app open and then open another app on the right side in a little sidebar area. The pro gives you the ability to resize that area so that it takes up half, or more, of the screen. This allows you to work with your Safari and your email at the same time. Or email and OneNote. Or, lots of things.

Now looking up something in my email that I need to include in a blog post is a trivial matter. Adding something to OneNote that I find browsing the web is simple.

The next big thing with the pro is that you can use the Apple pencil, which I do. Sure, I had a stylus before, I even had a pencil by Fifty Three which was pretty cool. The thing about the Apple pencil is that it is dead accurate and has almost no lag at all. This means I can draw fine lines like in OneNote where I make diagrams of how things work with and relate to each other, with ease. It also means that horrible lag when drawing or shading something is gone. This is as close to pencil and paper as I have ever seen on any device.

It is almost as good as the Wacom graphics tablet I have on my desktop computer, yes, it is that amazing. I find that I do not use the pencil as much as I had thought, but when I do, I really enjoy it.

The last feature I want to brag about are the speakers. The iPad Pro has four speakers and the sound is not only louder than previous iPads, but much richer. Sure, when I listen to anything more than a quick video I tend to use headphones or my Beats Pill speaker, but still, it is a huge improvement over previous generations making it really nice when you want to show someone something.

This month my wife wanted her own Pro after seeing mine and has normally happens, she managed to get the newer version. Occasionally I can get her off of it long enough to do a little comparison with my “old” model, heh.

The first thing I notice is that other than a slight cosmetic change and addition of a flash to the rear, it looks and feels the same. Because of the flash I don’t think you could really use the same case as the first generation but it would probably physically fit.

The next thing I notice is that it is fast, and I mean really fast. I thought mine was fast but nooooooooo, this thing makes mine look like something out of the stone age. It makes her old iPad Air look like an abacus. It is insane. I love it.

Now that is not a bad thing, since everything on the first generation is/was awesome, this one just doesn’t really improve on the awesomeness other than in speed.

Should you or shouldn’t you?

If you already have the first generation and are wondering if you should upgrade to the newer version, don’t. If we were talking about spending $100 or even $200 to upgrade, sure, the speed is really nice. Anything more than that and you are just throwing money away.

If you have a smaller one and are thinking about upsizing, maybe. Keep in mind that this beast is large and heavy compared to the standard iPads. This is particularly true since they came out with the new 10.5″ iPad Pro which is just slightly larger physically than the old 9.7″ iPads but has a noticeably larger screen due to reduced bezels. It also has the same processor and four speakers just like the 12.9″ version. It is also about $150 cheaper starting at “only” $649.

That being said, the 12.9″ is a beauty to actually use. There is nothing like it. Once you get over the bulk of carrying it around, working with it is pure joy. It is however painful to the wallet costing between $799 and $1229 without a pencil or case.

Compare all that to the new iPad starting at $329 and you have to really need or want the capabilities of the Pro to justify a 100% price premium, particularly since the new iPad contains the A9 chip which incredibly fast in its own right.

Looking back, if it were my decision instead of a Christmas present, would I buy it again? Probably, simply because the inner geek in me would not allow me to not buy it. Would I recommend the average person buy it? Probably not as I do not believe the typical user will benefit enough to offset the price.