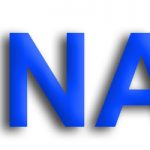 NAS, or Network Attached Storage is basically a large external hard drive that is not physically attached to a computer. Instead, it is connected to your home or business network and can be accessed by all your computers and/or many devices. 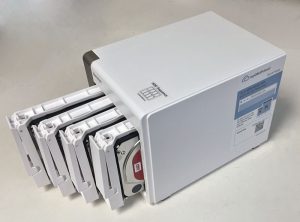 A four drive NAS from QNAP.

The primary use for NAS devices is for simple network file sharing. If you have several computers that need to access the same documents, videos, pictures or music files you can store them all on a NAS which is connected to your wired or wireless network. In today’s connected age this allows someone in the living room to stream a video to the TV while in another room someone is streaming audio to their phone and in yet another room someone is editing some documents for work the next day.

An advantage to using a NAS device instead of a simple shared external hard drive is that many NAS units offer two or more hard drives that can be configured into a Redundant Array of Inexpensive Disks or RAID. This configuration can be made so that should a hard drive fail, the unit lets you know and slows down but all of your data is still safe and sound. Simply remove the defective hard drive and replace it with a new one and the unit will resume normal operations.

NAS devices come either already populated with drives or empty and can vary in capacity from one single hard drive to units that hold twenty or more.

Another advantage to a NAS is that it can provide services much like a full network file server, at a much lower cost. While the services available vary from one unit to the next, there are several services which are very popular on most models. One of the most used services is security.

Using the security services you can have all of this data available to everyone or you can have separate usernames and passwords that allow access to certain folders and data for certain users. This is useful in homes by keeping your tax and financial information safe in one folder so that your kids don’t accidentally delete it. In a business environments you can again leave it all open for smaller offices or secure particular folders for different departments.

Another popular service is media streaming. Using this you can store all your media such as videos, audio files and pictures, on one device and have them accessed by smart TVs, tablets, phones, and computers. A great example is the one in my home which has videos and audio on it and I often use my Mac to play MP3s off the NAS directly to an Airport router connected to my home stereo. I can also stream videos to my 65” TV in the living room. I used to do this from a media server application on a computer but I was continually having issues as Windows did its automatic updates, problems with new devices and the media server required updates to the media server, etc. Streaming from the NAS solved all of those problems.

A correctly configured NAS with the appropriate service can also be used as your own personal cloud storage device. Think of having your own personal Dropbox or Google Drive with terabytes of storage and no monthly fee. Some even have apps that allow automatic uploading of photos and more from smartphones and tablets.

Higher end devices will even include services such as built in database servers, automatic upload/download via FTP or BitTorrent and much more. Many even have huge aftermarket ecosystems that develop new applications and services which can be installed on them allowing you to extend the capabilities of your device almost infinity.

Which one should you get? That is a really tricky question because it depends on what you want to do and how far you want to push the technology to do things that are not normally used “out of the box”. My advice is to start by identifying how much storage space you want and how you want it configured.

Space is simple, how many terabytes do you need? I suggest taking how much stuff you want to put on it and multiplying that by at least two. More is almost always better as long as you can afford it. I had almost four terrabytes of data I wanted to put on a new NAS so I decided I wanted almost 9TB of storage to start with.

The next question is how do you want the storage configured? You could have a single drive but that gives you no redundancy. If one drive fails, your data is lost. Having to allows you to run a “mirrored” array so that if one drive fails, the mirror copy takes over and things keep going allowing you to replace the failed drive.

Once you pass two drives things get more interesting. You can continue to add drives in pairs and run more than one shared folder, one per pair. A better way is to run what is called a RAID 5, where every drive in the array holds part of the data and a parity stripe. The parity stripe holds information that can be used to recreate the data on any one failed drive. For example in a three drive RAID 5 setup each drive holds one third of the data plus a parity stripe. If drive one fails the unit uses the parity stripes from drive two and drive three to recreate the data that was on drive one.

This slows the unit down considerably but does allow you to keep working. So why is this a better way? Because a RAID 5 is also the fastest of all the RAIDs. In fact, the more drives you put in a RAID 5, the faster it is because each drive only has to write a smaller part of the whole. It also allows you to increase storage by replacing the smaller drives one at a time and letting it rebuild. RAID 5s are also typically “hot swappable” meaning you can eject the failed drive and replace it while the NAS is running and serving up data. Nobody has to stop what they are doing.

Now with a three drive RAID 5 if a drive fails the unit may slow down enough to make streaming video difficult or impossible but larger arrays should not have this issue.

My latest NAS has four 3TB NAS hard drives in it. This brings up the next point of what type of hard drives to put in your NAS. Many manufacturers make NAS specific drives such as Seagate and Western Digital. These normally are capable of running 24 hours a day (normal hard drives are not designed for this) in small enclosed areas with high heat (again, not something desktop drives excel at). While these drives are more expensive than standard desktop drives it is certainly cheaper than constantly replacing failed drives, even if the failed drives are under warranty.

Now we come to the features of the NAS such as security, media serving, etc. Do not overlook hardware features such as multiple network ports, USB ports or redundant power supplies. My latest one came with several USB3.0 ports which made transferring data onto the NAS much faster and easier.

Lastly there is brand. The top three in my opinion start with Seagate for pure storage use such as for a small office where you want inexpensive shared storage. From there I move to QNAP which seems to be the best bang for the buck leader in an extensible full featured NAS. Third would be Synology which also makes a fantastic set of devices but does not seem to give you quite as much for your money as QNAP does.

There are far too many manufacturers out there for me to go into all of them, many of them make excellent products. The ones I mentioned above are ones that I personally have owned and/or used extensively. I currently have both a Seagate and a QNAP in my home, and I have installed and used several Synology units.