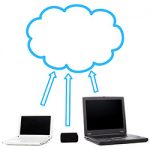 The cloud is simply a bunch of computers on the internet. While that may be a little to simplistic and not explain thing, that is the simple truth to it.

What that doesn’t explain is all the services available via the cloud and how you can use those services to make your life easier and better. That is what we will really be working on explaining in this article.

The first service we will explore is cloud storage. Simply stated this is a place where you can store things such as documents, pictures and music. The advantage to storing things like this in the cloud is that it is accessible on all your devices from anywhere in the world and if something happens to a device all your data is still safely in the cloud.

Think of it as an external hard drive, USB drive, DVD or just another folder that you access through the internet. You can use a connector program that makes the cloud storage appear to be directly connected to your computer. Many different cloud service providers have such a connector including Dropbox and Google Drive.

So lets say you have a smart phone, tablet and computer at home and you have them all storing their pictures in the cloud. If you take a picture with your phone, that picture is uploaded to the cloud and then appears on your tablet and home computer. This same thing can happen with documents. As you create or edit a document, that newly created or updated document appears on all your devices.

Lets take the pictures idea and delve a little deeper into exactly how this happens. For this example we will be using Google as our cloud provider although others are very similar.

On your smartphone and tablet you can download either Google Drive, or Google Photos to make this work. Since we are only working with photos at this point and honestly, Google Photos works better at managing your photos than Google Drive does, we will be using that.

From the iTunes App store or Google Play store (and I assume Windows Store as well although I do not have a Windows phone to see) you can download and install Google Photos. It is a free program and is easy to install and use.

Once it is installed you may need to create a Google account. This too is free and pretty much just involves you signing up for an email address. You will never have to use this email address, it does not replace your existing email address. It is simply so that you can have an account with Google for it’s services which just happens to include Gmail, their email service.

Now that you have an account and the software is installed there is an option to sync your pictures with the Google Drive. When turning that on there are two options; full resolution and allowing Google to compress the images.

The option of full resolution preserves the best possible quality of your image, but it uses storage space on your Google Drive. Since you only have 30GB on your free account if you have a lot of pictures that can go pretty fast, especially if you have a lot of documents and stuff you want online as well.

As long as you do not plan on printing your pictures out there is absolutely no reason to not allow Google to compress your images. I have yet to see a different even when viewing them on my tablet. If however maintaining the resolution at its absolute maximum is imperative, then select the full resolution option. Remember that you can always purchase more storage space above the 30GB you get free.

Now is you repeat that on your other devices using the same Google account they will all sync to the same place on the cloud, making the same images show up on every device. Neat!

One other difference is that Dropbox does not have an unlimited photos option like Google photos does.

Now every time you take a photo with your phone (or any other device), the Google Photos connector automatically uploads that photo to the Google Drive cloud (normally it restricts these uploads to when you are under wifi so you don’t use your expensive cellular data). If you then look at the Google Photos app on any other device, or in the photos folder of Google Drive, you will see that newly taken photo safe and sound on Google’s servers.

The same thing applies to documents. Today at lunch I had my Chromebook and wrote two articles. While the Chromebook is pretty nice for writing as well as very light and portable, it is not as nice as my Mac at home for working on the website. Once I got home I opened a new tab in Firefox and navigated to Google Drive online at www.google.com/drive. I then logged in, opened the documents I worked on at lunch, copied the text and pasted it into WordPress as a new Post. Easy as pie.

Now that we have pretty thoroughly discussed the idea of the cloud as a storage service, lets talk more about software as a service (often referred to as SaaS).

SaaS is basically software that is either hosted in the cloud, meaning you run it pretty much in a web browser, or delivered and maintained from the cloud but installed on your local device. It is generally sold as a subscription.

Some software even blurs this distinction such as Google Docs which can be installed locally on a Chromebook but runs in a web browser on Windows, Mac and Linux PCs as well as on tablets and phones.

The prime example of SaaS that is delivered and maintained from the cloud but locally installed is Adobe Creative Suite. Once you subscribe to their monthly service plan you can download, install and run a wide variety of software. This software is always the latest version as it updates whenever it is online, pretty much all the time. This way if you are running Photoshop version 20.1 when you go to bed, you may wake up to Photoshop 21.0.

This is great because you no longer have to pay for upgrades to the software or worry about applying patches. Everything is included, even technical support should you have any problems.

There is a down side to this which some people really dislike. You never own the software (or technically, a license to use the software perpetually like you used to). If you quit paying the monthly fees, you lose access to the software including the ability to work with any files you created while you were paying for the software. In effect, you become a software renter.

Another issue is that it requires pretty constant internet access to operate. If the software attempts to “phone home” and can not, it will stop working. This has actually happened to some Adobe users; one I heard about was on an extended sailing trip and another was in the Antarctic. Both lost access to software they needed while they were out of touch. In all fairness however, this is a pretty rare event in today’s always connected society.

The SaaS companies love this plan because it provides a continuous stream of income. Before SaaS, these companies had to entice you to upgrade with new features and improvements. They had to entice people to switch from competitors by being better, faster and more economical. Now all they have to do is get you started and the majority of people will pay every month forever.

Where do I fall on this? I prefer a one time fee. I like knowing that I can install my software on whatever machine I want, even if I move somewhere with no internet access, and use it until it just wont run on current machines. I also like the stability of knowing I do not have to come up with monthly fees every single month. This probably comes from my days where I was having a hard time affording my ramen noodles for dinner so every penny counted. I could save up, spend the cash once, and be done with it.

I hope this put some light on the murky topic of the cloud.