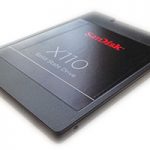 There are a couple of reasons you should use an SSD instead of a standard hard drive. Before we get into that, we need to understand both types of drives.

A standard hard drive consists of one or more platters spinning inside an enclosure. Each platter has multiple heads that read and write the data to the platters. Think of a record player and its needle (showing my age here). The speed of the drive is determined by the speed at which the platters spin (called the spindle speed, 7200rpm drives are typically faster than 5400rpm drives), the speed at which the head can move across the platters, and something called the areal density (how tightly packed the data is).

Spindle speed is the easiest to research as the speed is usually very prominently displayed on the packaging or at worst, their specification page online. The speed of the head and areal density on the other hand are virtually impossible to figure out. The best we can hope for is for someone to benchmark the hard drives and post the results online.

Speed tests such as Passmark scores listed at harddrivebenchmark.net can show you some interesting speeds. One of the fastest standard hard drives such as a 3TB Seagate scores 1,335 compared to the fastest SSD up there at 14,657, almost eleven times faster. Hard drives from just a few years ago may only score 600 or 700, so you can imagine how massive a performance difference there is.

The Samsung 850 Pro 512GB that just came in my new work laptop scores a cool 4,284, far from the fastest, but far faster than any standard hard drive. It is plenty fast enough.

Reliability is another reason to switch to SSDs. A study of 49,056 hard drives by Backblaze.net showed a 4.81% failure rate from 2013 through Q3 2015. Let me start by saying I disagree with that, I think it is far higher. That aside, what that number doesn’t show you is the breakdown of specific drives. One such drive was the popular Seagate Barracuda 7200.14 which had a failure rate of 30.94% in 2015. Almost one out of every three drives failed. That is more in line with what I have been experiencing.

A week doesn’t go by without us replacing a few hard drives, most often with SSDs to the delight of our customers.

SSDs fail too, as anything will. Unfortunately it seems much harder to get reliability statistics for them. I am not too sure why, but they tend to use different metrics and have very few people actually tracking them. All the articles I have read so far are at best, ambiguous. This means I have to fall back on my personal experience.

First lets cover my experience level with this subject. Personally I own two desktops and five laptops with SSDs in them. I also have one desktop and one laptop with rotational hard drives in them. I have been running SSDs personally for several years, I paid around $700 for my first 500GB SSD and that was a cheap one on sale.

Professionally I have probably installed a hundred SSD in new and used computers. These ranged from new server builds running a mirrored RAID of SSDs for the boot drives, to upgrading someone’s older PC with a SSD for a huge performance boost and new lease on life. The company I currently work for has several more techs who have done the same. As far as I know, the only SSD failures we have had in the past three or so years we have been installing these has been from things such as lightning strikes and power supply failures. I certainly won’t blame the SSDs for these failures.

Let me state this another way, not one single failure due to a defect in the drives, zilch. If the other techs were lying and replacing failed SSDs behind my back the old units would still wind up in our recycling, and they don’t. The only SSDs I have seen go through our recycling program are ones from machines that have been retired and the smaller SSDs we remove from these computers wind up in our shop as units used for clones or profile transfers.

So now we have seen that SSDs are both far faster, and much more reliable. There has to be a downside, doesn’t there? Well, yes there is. Price per gigabyte.

That sounds pretty harsh, and maybe even a deal killer. I have to spend ten times more money for an SSD? Well, no, not really. Take a look at your primary hard drive, how much space are you using? If you are like most of my customers probably somewhere around a hundred GB. That means you can spend $87 on a 250GB SSD and not even have it half full. Crisis averted.

But what if you are like me and have 500GB of just pictures, not to mention 40GB of music and tons of other stuff? Simple, I put a 500GB SSD as my primary boot drive (you could just as easily use a 250GB) and then put in a standard 1.5TB hard drive as a data drive which keeps all my pictures, music and large data. This way my computer is extremely fast booting and loading programs, and has plenty of storage space for the larger things. I only have this issue with my main PC at home, all my other PCs and laptops have more than enough storage and since I am in the process of moving all my larger data over to a new NAS, this won’t be an issue by the time you read this.

The truth is that if I put a 250GB SSD in every customer’s machine I have, maybe three of four would have a problem. The rest would be massively appreciative of the incredible increase in speed.

Sop what about these hybrid drives or Apple fusion drives? These type of drives literally merge a small SSD in with a larger standard hard drive to give you the best of both worlds. It is a great idea in theory, but I am not a fan. Why not?

First is that you still have a rotating hard drive, and it’s very high failure rate. This is one of the things I want to avoid. Second, even though there is an SSD in the package, the standard hard drive slows things down so you only get a smaller increase in speed. It is faster, no doubt, but nowhere near as fast as an SSD and no where near as reliable.

A better solution that we already discussed would be to use a SSD as the primary drive and a standard hard drive as a data drive assuming you need that much storage. Of course as time passes the SSDs get larger and cheaper per GB so this may not even be an issue. Just a few months ago I installed my first 1TB SSD in a customer’s machine and was surprised to find out it only cost a little over $300. Yeah, that ain’t cheap but considering it wasn’t too long ago that same drive would have cost thousands of dollars, it sure isn’t bad either.