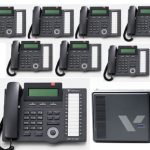 While business communications continues to shift from standard mail and telephones towards email, text and social media having a telephone for your office is still one of the virtually mandatory things in businesses with more than a few employees.

Very small businesses can get by with a cellphone that they carry with them everywhere they go. Once you start to add employees, get an office that is open during business hours and put up a real sign it might be time to look into real business phones. Unfortunately when it comes to phone systems everyone wants to sell you something and there seems to be no place to go for real information, until now.

Some terminology is important so you can understand what we are talking out, not to mention communicating your needs to others so you can order the correct items.

Stations or phones are the number of physical phones a system can handle. This includes cordless and normal corded desktop phones as well as speakerphones/conference phones. It is important that you know this number from the start as some systems may have a maximum number of phones they will support. If you order a system that supports 16 phones with all 16 phones being used and later want to add a speakerphone for the conference room table, you are out of luck.

Auto attendant is the feature than answers the phone and says something like “thank you for calling ABC inc, press one for sales, press two for support, press……” and then routes the call accordingly.

These days there are basically three options in my opinion for small businesses; SBSs (Small Business Systems), digital systems and VOIP systems. I listed these in increasing order or complexity, features and price. Let’s take a look at what we can get. 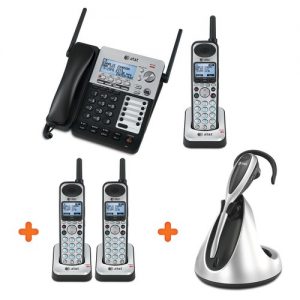 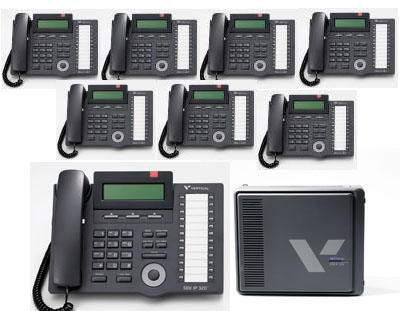 Digital systems are the next step up and can run about $1200 for a basic system with three phones and three CO lines. They are also more expensive to install and program with an average of two hours for the tech as a minimum for this small system. Systems like this typically handle up to 32 phones and 12 CO lines. These typically provide more advanced features than the small business systems with things like auto attendant. 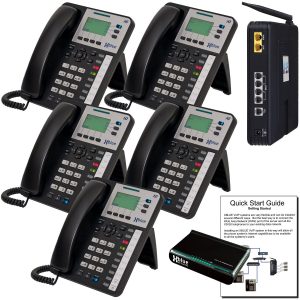 VOIP systems can get larger still but typically start at several thousand dollars and are not really economically viable for businesses with less than 20 or so phones. The advantage is that you can typically integrate the phone system with software on the computers to allow you to use your Outlook or other compatible contact program to not only dial the phone and provide caller ID, but keep track of when you talked to whom. A major advantage that VOIP systems may offer (not all do) is the ability to have phones in different physical locations (even in different countries around the world) all act like they are in the same building, all ringing, all able to transfer calls, etc.

So which type should I choose?

The truth is around here very few businesses need anything more than the SBS. These are robust systems that can provide up to 8 CO lines and 24 phones at an incredibly reasonable price point.

In fact the ATT Synj system that supports 4 CO lines and 11 phones is more than enough for most businesses in the Huntsville area and is fast and easy to install. One installed, adding another phone, a cordless headset or conference speakerphone is straightforward and easy, usually requiring only a couple of minutes without a tech needing to be called.

ATT Synj systems are available on Amazon in a variety of configurations.

How easy to install are these?

The ATT Synj system uses one main desktop phone where all your CO lines plug in (remember, each CO is a separate phone number). This phone is then the cordless base station and answering machine that all the other phones connect to. Phones that connect to this main phone can either be standard desktop phones style (yes, cordless desktop phones. They plug into an electrical outlet for power but do not have to have a phone line running to them) or standard cordless phone style.

Once you plug in the main phone and get it running adding another phone is as simple as selecting registration from the base and turning on the new phone you want to add. Occasionally you may have to select registration on both the base and new phone but that is becoming more rare. I have set up many of these and the setup of the phones has never taken me more than an hour.

Digital systems are a little more complex as they consist of a KSU (big box that mounts on a wall typically out of sight in a wiring closet) and a separate wire for each phone. Once this is physically mounted you begin the programming as to which phones ring, which do not, what lines are available to which phones, what the person’s name is on each phone, setting up their voicemail, etc. These typically require tools such as a punch tool, crimpers, etc.

VOIP systems are basically computers that run on your network. Each one plugs into a network jack which then goes into a switch. This switch then connects to the KSU and the internet. Once all of the physical connections are made you will need to do phone programming just like in a digital system and then network programming as well. These will require tools similar to with digital systems and can require network specific tools and testers as well.

What if I need more?

For the DIY type, or those with someone to call on for their IT needs, try Xblue. Their systems get excellent reviews and are priced almost as good as the ATT systems already discussed. All their systems I have seen include auto attendant and more advanced features.

If you want something more mainstream you can get a Vertical SBX 320 system which can handle up to 12 CO lines and 32 stations. It can even run up to eight IP phones if you want although I recommend sticking with just the digital phones as they seem more robust, cost less and offer 95% of the same features. In fact, I do not have a single customer that uses the feature set that only the VOIP phones offer.

Both these systems are available on Amazon and a qualified phone tech should be able to install either. I would point out that only a Vertical certified technician can call and get technical support for their systems but there are several places you can get help for them online without a tech ID. Yes, I am a certified tech 🙂

I have yet to see a realistic need in this area for a VOIP system outside of organizations that have their own internal IT department. If you have an IT department and are interested in VOIP, contact them and get their input as they are the ones that will have to make it work. They may have specific requirements that may make certain systems a better choice than others.

Again, if you are adventurous and the DIY type, Xblue offers a small VOIP phone system for a very reasonable amount of money. Also again, Vertical has VOIP capability in their SBX and above lines.

Other than size, are their other differences?

Yes! Normally a phone system from a big name manufacturer such as ATT, Vertical, Cisco, Avaya, etc will have higher quality components including the phones themselves. What this means is greater life expectancy under normal use. This can be important because the longer the phones last, the less you paid for the system because you can amortize it out over the lifetime of the system.

Those same big name companies usually have replacement parts for many years so when a phone does go out (and they do!) you can get a replacement one fairly easy. I regularly sell refurbished Vertical phones to customers who have one fail with very good results at about half the cost of a new one. Cheaper phones such as the ATT ones I just suggest the customer buy new as the savings for buying used or refurbished is just not that great.

Wiring is an important consideration for many systems. If you plan on installing a digital system you need four wires (one cable) running from where you will install the KSU (big box that mounts on the wall and controls all the phones) to where each phone will be without being split off from other cables. If you do not already have this, and just because you have a jack on the wall does not guarantee you do, then running new cable can cost between $100 and $150 per phone.

For a SBS like the ATT Synj all you need is all the phone lines at wherever the main phone will be. If you previously had a digital system or no system at all, you may need to run wires to where this phone will be. Fortunately you only need one pair (two wires) for each line so a standard network cable can handle four lines with ease.

It is normally easier and cheaper to replace a digital or VOIP system with a SBS than the other way around.